Adam Brand took some of his mates on an extensive tour of NSW and QLD.

Whitenoise Pro Audio was lucky enough to do 2 of the “Country Thunder” shows in Mittagong and Castle Hill.

Kicking off the storm Matt Cornell better known for his bass playing shared some of his tunes from his Solo album “Out Of Suburbia”.   He was then joined by fellow band member Sam Hawksley with his soothing vocal style.

Next to take the stage was the dynamic duo McAlister Kemp offering songs from their chart topping album plus their new hit from the second album ‘Country Proud’.

Then it was over to the girls, fun loving sisters Sophie and Celeste Clabburn minus the hats to sing out some of their favourite summer hits.

The storm erupted when Adam Brand himself hit the stage performing his classics like ‘Dirt Track Cowboy’, ‘Ready for Love’ and he had the patriotic crowd on their feet with his hit ‘The Anzac’. 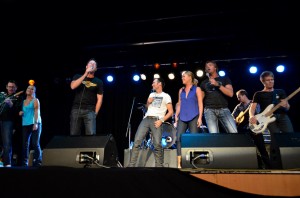 He also gave the crowd a sneak peek of his next big hit written in the USA.

The night ended with each of the performers returning to the stage for the collaborative finale, having a toast and singing Adam’s Hit ‘Hell of a ride’ then a Beatle hit ‘With a Little Help from my Friends’.