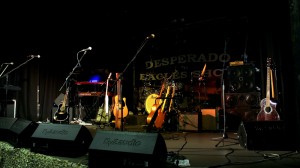 Whitenoise returned to the Asquith Leagues Club on Saturday night May 18 to do production for one of Sydneys finest tribute shows – Desperado The Eagles Tribute.

Desperado have won both the Mo and Ace Awards for the most outstanding tribute show of 2012 and have just recently won the Mo Award for a second year in 2013 as well. Congrats to the boys for their achievement.

Although a small crowd was in attendance, from the raptuous applause it sounded like an arena full. The audience was on their feet from the first song and loved every classic song the boys produced. The club surely ranks as one of the best load in setups in Sydney? Lets hope we can go back there real soon.